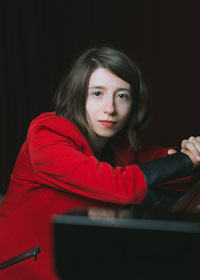 Born in Baku, Aserbaidschan
When she was seven, she stood on the concert podium.
At the age of eleven she played Mozart's Piano Concerto in D minor with the State Symphony Orchestra for the first time, followed later by Beethoven's C minor and Rachmaninov's Second Piano Concerto.
First education: In International Relations at the State Academy of Administration, graduated with distinction in 2006.

At the same time: success in several competitions at home and abroad (Kara Karayev Piano Competition in Baku, Smetana Competition in Plzen, Czech Republic), after she decided to combine her further professional career with music.
Bachelor studies: 2006-2009 with Prof. Oqtay Abaskuliev in Baku Academy of Music.

During this time she intensively studied the music of the Azerbaijani classic Kara Karayev (1918-1982). In 2007 she gave (for the first time in history) a 3-part piano recital at the Academy of Music consisting exclusively of the works of the great master.
2007 Golden Medal of the International Week of Conservatories in Saint-Petersburg, Russia.
In 2009 she won a scholarship from the Norwegian State (QUOTA) to study for 2 years in Bergen, Norway at the Grieg Akademiet.

Master studies: 2009-2011 with Prof. Einar Röttingen at the Griegakademiet in Bergen, Norway.

During this time she gained a greater affinity for the music of L.v.Beethoven and C.Debussy, with whom she also later connected many of her projects.

Collaboration with the pianist Leif Ove Andsnes. 2009 during his work on Rachmaninov's 4th Piano Concerto she played the orchestral part for him. In 2010 Leif Ove Andsnes joined the Ruby Chisel Trio for the Festspillene i Bergen.

In 2010 she won a university competition after playing Mozart's Piano Concerto No. 21 with the Bergen Symphony Orchestra on two evenings.

2012 Move to Berlin, Germany: Foundation of the family.

2012 Summer course of the Akademie Neue Musik with Marino Formenti. This encounter has given her an important impetus. There she performed the cycle «Zwiesprache» by Wolfgang Rihm in the presence of the composer.
2013-2016: Concert exam study with Prof. Jochen Köhler at the University Halle-Wittenberg. A time of musical re-evaluation and redesign. She passed the final concert examination (including the 4th piano concerto by L.v.Beethoven) with distinction.

This time (for personal and musical reasons) was closely influenced by the music of the composers who were ostracized. In a short time she has included the works of A.Schönberg, E.Schulhoff, E.Krenek, A.Webern, B.A.Zimmermann in her repertoire.

Collaborations of several years with the Musical Instruments Museum, Britz Castle, Grube Castle in Berlin, Moritzburg Museum in Halle, Landesmusikakademie in Sondershausen, Worpsweder Saal der alten Schule, Rammenau Castle and many more. have been created: Since 2013 she has performed various solo and chamber music programmes there (several times a year). Two concerts with the State Chamber Orchestra of Azerbaijan: piano concerto by jazz classic Vagif Mustafazadeh and piano concerto by Alfred Schnittke.
2014 Opening concert of the «Impuls» Festival: She was significantly involved in a performance of «Canto ostinato», an extensive work by the Dutch composer Simeon ten Holt, broadcast live by MDR.
February 2016: Solo evening «Kleine Heimat: Übertrag» in BKA Theater, «Unerhörte Musik»: one of the most important concert series for modern music in Berlin. Pieces by composers from Berlin and Baku, including premiere of «September Clouds» by Ayaz Gambarli.

Spring 2016: A CD on «Note und Ton» with works by Wolfgang Stendel and Ernst Krenek: in collaboration with pianists Svetlana Meskhi, Jan-Christoph Homann and Johannes Dehning.

September 2017: Piano Concerto by W.A.Mozart in F major No. 11 with the Chamber Orchestra of Azerbaijan