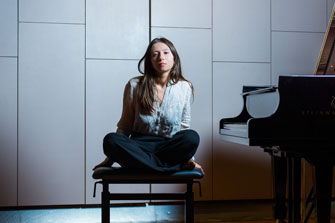 The connecting point of all composers is the city of Berlin, where they worked at different times. Berlin is also the adopted home of pianist Fidan Aghayeva-Edler.

00:00/00:00
Arnold Schoenberg - Suite Op. 25: Gigue
Arnold Schoenberg - Suite Op. 25: Menuett
Bernd Alois Zimmermann - "Extemporale": Praeludium
Bernd Alois Zimmermann - "Extemporale": Bolero
Ernst Krenek - Kleine Suite Op. 13a: Foxtrott
Erwin Schulhoff - Suite dansante: Stomp
Ursula Mamlok - "2000 Notes": II
Ursula Mamlok - "2000 Notes": III
Verdina Shlonsky - "Pages from the Diary": Good Humor
Verdina Shlonsky - "Pages from the Diary": Vision
«For my first solo album I ve chosen 6 collections of short pieces, 6 suites. Among them are my old favorites — like Suite Op. 25 by Arnold Schoenberg, Kleine Suite by Ernst Krenek, Suite dansante en jazz by Erwin Schulhoff, but also my personal recent discoveries: suite «Extemporale» by Bernd Alois Zimmermann whose 100-year anniversary we celebrated in 2018, and two suites by two female composers whose names even are not very-well known yet or have been forgotten. What is common with all those 6 composers is the fact that all of them were connected with Berlin, at various stages of their lives. They were born here, they studied here or they had to leave this city because of the prosecution — all in all they made home in Berlin, as well as I did.»

Short info: After more than 70 years, the music of this period is still not widely-known. Partly it has to do with the development of the componistic language, and partly with the long-term prohibition in Europe by Nazis and massive forced emigration and murder of ostracized composers.

"Degenerate art" - this term was invented by Nazi Regime already in late 1920s to describe the modern art. In the 1930s various artists, composers, writers were banned in Nazi Germany on the grounds of being Jewish, Communist or simply too progressive, "un-German" (=un-traditional). Fauvism, Cubism, Dada, Surrealism, Symbolism - those aesthetics were not appreciated. An exhibition with a name "Degenerate Art" was held in 1937 in Munich, consisting of 650 modernist artworks. Some of the music of ostracized composers sounded there as well. It was intended to provoke negative assosiation with the modern art. With the outbreak of the War most of the progressive artists left Europe. Some of them who stayed were brought to the concentration camps and murdered. The modern art (as well as music) continues to stay detached and often unreachable for the wide audience.

«I am very happy and proud to present today my CD «Verbotene Klänge: Sechs Suiten»!

Among others I am discovering life and work of an extraordinary composer: first female composer and musicologist from Israel. Neglected and forgotten already during her life time partly because of the lack of interest in traditional mizrahit music, but also because of being a woman, her music captured me from the first moment I heard it. And now I am happy to share it with the broader audience.

Another discovery: music of Ursula Mamlok, who left Berlin as a teenager. She was Jewish. Her talent had to blossom in the USA. She had received a great education and also made friends with Schoenberg, Krenek and other artists in exile. She also had a successful career, but at the end of her life she suddenly returned to Berlin, her first home.

That has always amazed me in this city. All the expelled artists, the terrible history of the 20th century, and again and again musicians, writers, all the artists come back. Mystical!

Only poor Erwin Schulhoff did not make it abroad. As a Jew, Communist and national of a hostile state (Soviet Union) Schulhoff was interned and deported to the camp near Weissenburg / Bavaria, where he died in 1942.

CD Release Concert took place on 14. March 2019 in an extraordinary place: a communication bunker from 2WW times in Berlin. I wish for all of us — and our children — that in the future places like this serve only as museum, exhibition spaces or concert halls with an exquisite acoustics, and not for wars and political extermination..»